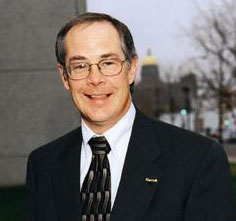 The state banking superintendent says consumers are experiencing a bit of sticker shock when they take out a conventional car loan.

"A lot of the credit that consumers relied on to purchase cars and other durable goods that was provided by manufacturers captive finance companies has dried up," Gronstal says. "Those captive finance companies — like GMAC, Ford Motor Credit, those storts of entites — had loan rates that were, essentially financed by their parent company, in order to help sell the product."

Now, since car companies’ loans aren’t as readily available, many consumers are approaching a traditional bank for a loan to buy a car or a big-ticket appliance. "Banks…have to charge a more realistic interest rate and so I think people are kind of shocked that, perhaps, a one- or two-percent car loan isn’t available to them anymore, so they think that credit isn’t available," Gronstal says. "Credit is available, but the banks, they have to charge more."

Gronstal says there appears to be retraction on both sides of the ledger when it comes to loans. "We see both a shrinking in demand for loans and a more cautious approach to lending by the lenders," Gronstal says. "But the biggest decline in credit availability is not bank credit. It’s credit from non-bank sources."

Gronstal testified before the Legislative Oversight Committee this past week, answering questions on a variety of issues. According to Gronstal, ag banks and farm borrowers are in "good condition" and he foresees no shortage of farm credit for the 2009 growing season.

And Gronstal said the few Iowa banks which receive federal bailout funds should have no problems adhering to the $500,000 limit on salaries for the top 15 executives. "I can tell you that for most Iowa state-chartered banks, the top 15 people in the bank don’t collectively make a half a million dollars (today)," Gronstal told legislators.