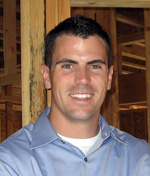 The number of homes sold in Iowa fell 11% last year, while the average statewide sales price dropped two-percent. With so many job cuts and troubles in the banking and housing industries, now might not seem to be the best time to go into real estate.

Still, one new realtor in central Iowa says he’s excited after his first year in the business and chalks up his stellar record to his roots, having grown up on a farm. "Once I come in contact with someone, either a referral or someone I meet at an open house or randomly in a grocery store, once I’m in contact with them, I try and treat them like I treat my wife," Cy Phillips says. "I try and do the best job I possibly can. Communication’s the key in this business and that’s one thing I’ve learned in my short career."

The 25-year-old Phillips won the "Rookie of the Year" award from the Des Moines Area Association of Realtors after selling 31 homes last year, his first full year on the job. That’s more than six times better than the average.

Phillips says, "The average closed transaction for a realtor in Des Moines was just over five (homes) over the course of the year so with 31, it was a pretty good year." The average of 5.4 homes sold was compiled from the sales of some 1,500 central Iowa realtors. Phillips graduated with a communications degree from the University of Iowa in 2006 and became a realtor in 2007.

Like farming, he says being a realtor means he’s in to work early, working hard and working long hours, but he says that ethic is paying off, even in tough economic times. He’s upbeat about the year ahead. Phillips says, "2009, it’s started off really well and I think it’s actually going to be a good year, at least where I do the majority of my business, the west side of Des Moines, could not be more solid."

He’s a native of Arkansas, where he grew up on a rice farm. Phillips was recruited to the U-of-I to play football, where he was a back-up quarterback during the seasons from 2002 through ’06. His wife, who he met during his freshman year at Iowa, is a Clive native and she’s the reason they ended up settling in central Iowa.