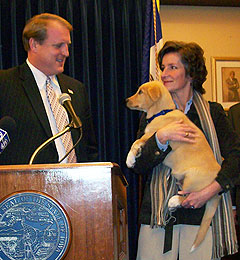 Governor Chet Culver and his wife, Mari, introduced the new family pet to the public today.  "The newest edition of the First Family of Iowa — Buck Culver," Governor Culver said with a flourish. His wife, Mari, held the three-month-old puppy in her arms.

The crowd of over 40 people had gathered in the governor’s office for an event celebrating four Iowa cities which have been declared "Great Places," and there was a lot of oohing and aahing, plus applause. The dog, however, seemed comfortable in the limelight and did not wiggle or try to make a dash for freedom.

"He kind of forgets he can bark," Mari Culver explained, as the dog was silent during his three-minutes in front of the cameras and microphones and crowd of people. "And then once every five or six days he remembers, and barks."

Mari Culver said her two young children are responsible for Buck joining the family. "The kids and I were shopping out and stopped at that pet food and acquatic center out on 22nd Street in West Des Moines and we came home with an Animal Rescue League puppy," the first lady said.

The governor said their children, John and Claire, are excited have a puppy. "Our cat, also from the Animal Rescue League, what, 15 years ago — Fran is adjusting, let’s just say," the governor told the crowd.

The young pup doesn’t have a pedigree, but Mari Culver guesses the dog is a mix of many breeds. "He’s got a little bit of everything we think. We’re not quite sure — yellow lab, shepherd, setter, maybe some collie," she said. "He likes to roll in the snow, so I think some huskie."

Buck has lived in Terrace Hill, the governor’s mansion, for about three weeks, but as for whether he’s eaten or chewed anything he’s not supposed to — Mari Culver says that’s a "state secret." The Culver’s joked that Buck is a Democrat, and revealed they named the dog for Buck, the dog which is the main character in the Jack London book, "Call of the Wild."

President Obama promised his two daughters they can get a dog, but no news yet on the national front.