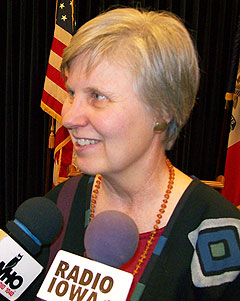 The state’s new "Poet Laureate" says she’s looking forward to poetry slams, hip hop jams and all that is involved in serving as the state’s "symbolic leader of poetry."

Iowa State University professor Mary Swander got a phone call Tuesday night at 5:30 telling her she’d been chosen for the role.

"I was just kind of stunned. I thought, ‘Wow! This is for real,’" Swander says. "I knew I was nominated, but I’d been nominated before so I wasn’t counting on anything at all, so it’s a huge, huge honor. It was a big surprise."

Swander has had 11 books of poetry published. "I write a narrative poetry. You read a book of my poetry, it’s like reading a novella or a novel," she says. "…I’ve dramatized many of my poems, too, for the stage…The ordinary citizen of Iowa understands my work very well."

Her best-selling book is "Driving the Body Back" which is written in the style of her favorite poet — Geoffrey Chaucer. "I based my book, ‘Driving the Body Back,’ on Canterbury Tales," Swander says. "It was like a journey and there was a tale told at every stop and so I thought if Chaucer can do it, so can Swander."

Swander embraces all poetry, in any form. "Hip hop’s an interesting kind of poetry. I would like to get people — wherever they are, whatever stage of life, whatever they cue into — to develop some energy so we have some cohesion in the state around poetry to raise the consciousness of it," Swander says. "You know, if you’re into hip hop, I don’t want to lay on a bunch of sonnets on top of you and say, ‘You have to write like this or you have to read these.’"

According to her website , she lives in an old Amish schoolhouse, raises geese and goats, has a huge organic garden and plays the banjo. Swander is succinct when she sums up the power of poetry. "Poetry teaches us how to live and how to die well," Swander says.

Swander was born in Carroll in 1950. She grew up in Manning and her family later moved to Davenport.

Click on the audio link below to hear an interview with Swander conducted by WHO Radio reporter Richard Lee and Radio Iowa news director O. Kay Henderson.