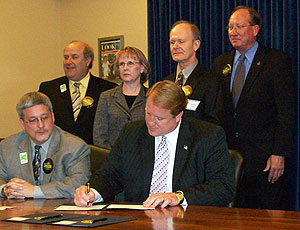 Four more Iowa cities have been designated as "Great Places" and leaders from the communities were at the statehouse today for a formal ceremony to mark the accomplishment.

Cyndi Peterson, director of the Iowa Department of Cultural Affairs, greeted the representatives from the "Great Places" cities of Spencer and West Union, the Marquette-McGregor area, and Warren County, which is the Indianola area. "I know you have all worked very hard to get to this point, but your real work starts now," Pederson said. "It’s time to roll up your sleeves (and) take next steps to achieving that vision. We look forward to our partnerships with you and together, we look forward to making Iowa a great place, one piece at a time."

In 2005, the state established a program which links experts in state agencies with "Great Places" communities to, for example, determine what grants may be available for cultural attractions. Clinton, Coon Rapids and Sioux City were the first "Great Places." There are 13 other cities participating in addition to the four which signed memorandums with the state today.  Governor Culver praised the four new "Great Places."

"The development of arts and culture as well continuing to build upon our quality of life is crucial to Iowa’s efforts to retain young people and to attract new residents of all ages, " Culver said. "The Iowa Great Places programs is one of many ways Iowa is addressing these issues, partnering with communities and counties across the state to assist in the development of vibrant, authentic communities."

While Culver said all four of the new "Great Places" had "done their homework" — he singled out Marquette and McGregor as, the governor’s father, John — a former congressman and U.S. senator, maintains the Culver family home in McGregor. Culver told representatives from the area who quickly signed the memorandum with the state that they should have read it first. He joked the fine print committed them to building a "governor’s retreat house on the bluff" overlooking the Mississippi River.