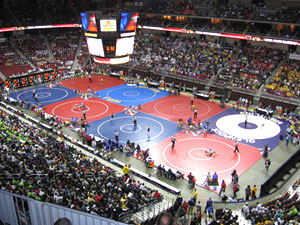 The state high school wrestling tournament is underway in Des Moines and the opening round in class 3A featured a one-versus-two showdown at 119 pounds.

Meeks got an early takedown the turned Sand over for two back points. Meeks says he was looking for the pin, but Sand fought off his back and kept it from happening.

After winning the state title a year ago at 103 pounds North Scott’s Adam Perrin advanced at 112 pounds by pinning Dan Adair of Sioux City East. He says it felt good and finally getting back to the state tournament was good.

Don Bosco Senior Bart Reiter opened his quest for a fourth state title Wednesday night by scoring a technical fall victory over Tasker Phillips of Pleasantville at 135 pounds in class 1-A. Reiter is trying to become the 18th wrestler in Iowa history to win four state championships.

Reiter says, while he expects to win, he knows claiming a 4th state title will take some work. Reiter says he knows he has to work hard every match, but feels he has trained harder than anyone and knows what it takes to win.

Reiter plans to wrestle at the University of Minnesota next year. His older brother, Mack, wrestled for the Gophers and now is a graduate assistant for Minnesota. Should Bart win the 135 pound bracket, he and Mack would become the only brothers in Iowa to both win four state titles.