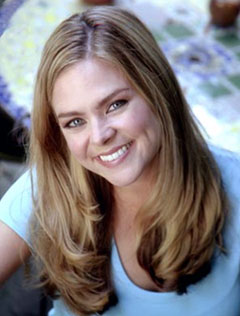 Heather Hach grew up in Ames and now lives in L.A. where she’s worked as a screenwriter for several films and helped turn the movie version of "Legally Blonde" into a stage musical.

Hach says her training started early. "I grew up with my mother who was always singing Broadway tunes and even though I hadn’t seen a lot of the stuff, I know most of the words because there was so much singing in my house," Hach says.

"I used to do improv comedy and my favorite game to play was always musical comedy. I think it’s innate within me." Hach wrote what’s known in the industry as "the book" for the stage version of "Legally Blonde."

She says the book is all of the spoken dialogue of the musical — anything that’s not being sung. It’s a complicated process, she says, to take a storyline from the screen to the stage. "You work really closely with the creative team, the director and composer and lyricist and really try to analyze what are the things people are going to want to see from the movie. You have to be true to the spirit and story of the movie but how do you update that and what do you take and turn it into more of a musical moment?"

Hach says they chose to make a few changes in the musical version of the story about an underestimated blonde who won’t take "no" for an answer.

Hach says: "She sends a video essay of why she should get into Harvard Law in the film. We decided it might be more fun if she actually burst into the office and does sort of a presentation which was a great opportunity for dance and so forth and the spirit of Elle Woods and her larger-than-life personality."

In addition to the 2001 movie that starred Reese Witherspoon in the title role, the story has become a favorite among younger fans through its airing on M-T-V and the 2008 reality series, "Legally Blonde: The Search for Elle Woods." Hach appeared as one of the judges on the TV series and also had an on-screen cameo in the 2003 remake of "Freaky Friday," a film for which she wrote the screenplay. The 36-year-old mother of one says the Broadway musical production that will arrive in Iowa in a few weeks aims for a wider audience than just young women.

"We knew that it was going to be a real wicked girl-power kind of audience but we were very cognizant of the fact we wanted to have something that everyone’s going to enjoy," Hach says. "If you only have teenage girls going crazy, it’s going to be a bad experience for their parents." The show is scheduled to run Tuesday through Sunday at the Civic Center of Greater Des Moines .