You are here: Home / Education / State Senator proposes one superintendent per county 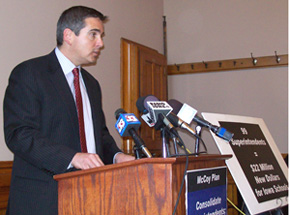 A state senator who started talking about school district consolidation and sparked outrage from small school advocates is floating a new idea.

Senator Matt McCoy, a Democrat from Des Moines, suggests reducing the number of full-time superintendents in Iowa from 322 down to 99.

"The legislature did the exact same thing in the 1930s during the Great Depression, They reduced the number of superintendents to one per county," McCoy says. "They realized that to protect students and the work that went on in Iowa’s educational system they had to lighten the burden of administrative costs."

McCoy admits the idea of forcing schools to consolidate is going nowhere in the legislature, and that’s why he now says Iowa doesn’t have too many schools, it has too many superintendents. "I believe that this proposal more accurately reflects the mood of this legislature and that’s to save money but to still maintain their local schools," McCoy says.

McCoy is introducing a bill to accomplish the goal of one superintendent per county, but he predicts legislators will decide to conduct a study. "Iowans have to change and change is hard," McCoy says. "We all like change as long as it’s not happening to us and most of appreciate our local school districts and most of us believe that there’s too much government in this state, but we’ll die to defend it to the bitter end."

McCoy cites statistics indicating while the number of students in Iowa schools has declined 15,000 since 2001, yet the combined salaries of Iowa school administrators has grown by eight million. "This is not an urban issue," McCoy says. "This is not an us-against-them." For example, McCoy envisions the nine school districts in Polk County, where he lives, would be led by one superintendent.

According to McCoy, Iowa has a "surplus" of superintendents and the superintendent’s salary in one of the five smallest school districts in Iowa amounts to nearly $1000 per student in the district. McCoy estimates his proposal would save at least $22 million statewide.

You can listen to all of what McCoy had to say at a statehouse news conference by clicking on the audio link below.