You are here: Home / Crime / Courts / Iowa Court system to shut down 7 more days to save money 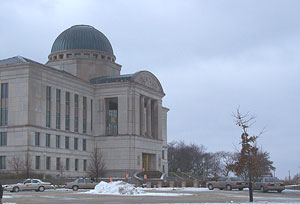 The Iowa Supreme Court has ordered the closure of all state court offices for an additional seven days in anticipation of a $3.8 million budget cut in the current fiscal year.

The court office closures are scheduled for March 20th, April 10th and 24th, May 8th and 22nd, and June 5th and 19th. The order does not affect judges and magistrates as their salaries are already set by the legislature. All other state court employees will face seven days without pay.

Davis says the unpaid leave for the roughly 1,600 employees saves the courts around $335,000 a day. Those employees already took a forced day off without pay on February 16. Davis says the additional seven days of closures will produce delays in cases.

"In particular, civil cases like landlord/tenant disputes, foreclosures, divorces, child support modification…and cases like those," Davis said. "Certain cases – like criminal, child abuse, neglect and mental health cases will take priority – but they will slow down too because everything will slow down."

The Iowa Supreme Court has also canceled oral arguments scheduled for late April to save on travel expenses and ordered clerk-of-court offices to close early to the public, at 2:30 P.M., on Tuesdays and Thursdays.