You are here: Home / News / Cascade beats Denver in 2A 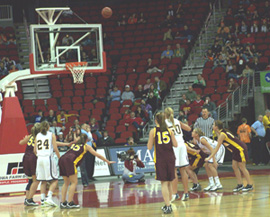 Cascade used an early scoring run to take control and never let Denver into the ballgame, winning 49-34 in a Class 2A quarterfinal.

Cascade Coach Mike Sconsa says his team came out strong. He says they came out loose and weren’t nervous and played a good game defensively. Sconsa says they have to keep the same approach in the next game.

Cascade advances to the semifinals with a 23-3 record.

Denver coach Steve Moon says their effort on the boards fell short.Moon says they didn’t do a very good job of blocking out and getting rebounds, as he says the nerves probably go to them.

He says knew they needed to limit Cascade to one shot and it wasn’t that they weren’t prepared, they just didn’t get the job done. Denver ends the season at 21-2.