You are here: Home / News / Hinton downs Central Decatur in 2A 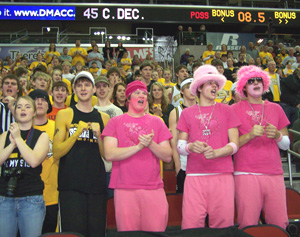 Sixth rated Hinton trailed by two at the half, but took the lead in the third quarter and held off ninth-ranked Central Decatur 54-45 in the Class 2A quarterfinals of the Girls’ State Basketball Tournament.

Hinton Coach Joel Small says they were not worried being down only two at the half.

Small says they’ve been a third quarter team all season long and were again today, as they outrebounded Central Decatur and were able to keep them from shooting the three. Small says they have to get ready for the next game. He says they move on and they have to keep to the goal of winning one game at a time, something they’ve done for 25 games and will stick with it.

Central Decatur Coach Curtis Boothe says Hinton did a good job of rebounding and guarding against the three point shot to hand them their first loss of the season. He says it’s tough to judge the team by one game at state, but he says they had a good season and have a lot to be proud of. Central Decatur finishes the season at 25-1.