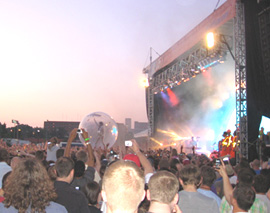 Plans are in the works for a second 80/35 Music Festival in Des Moines this summer.

The two-day festival was held in an area of downtown that’s now being converted into a sculpture park.

The 80/35 project manager Amedeo Rossi says this year’s event will remain downtown – moving just one block east. "We looked at some parking lot arrangements and other things, but we really felt this park and area had enough to replicate what was done last year and we’ll actually be a bit closer to the core of downtown," Rossi said.

Booking high-profile acts has been a little easier this year following last year’s successful event. Rossi says it also helps that other Midwest music festivals are taking place at the same time as 80/35. That includes Summer Fest in Milwaukee and the Rothbury Festival in Rothbury, Michigan.

"Those events happening the same weekend really help draw some artists to the area and we’re already looking to place (acts) that are going to be in those festivals," Rossi said. He plans to announce some of those bands in the next few weeks, but music fans can begin purchasing tickets for 80/35 this Saturday. The festival, named for the interstates that cross paths in Des Moines, is scheduled for July 3rd and 4th.