You are here: Home / Military / Funeral for Iowa native killed in Afghanistan is Saturday 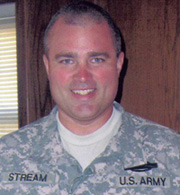 A fallen soldier who grew up in southeast Iowa will be buried Saturday.

Thirty-nine-year-old Sergeant Scott Stream was killed while serving with the Illinois Army National Guard in Afghanistan.

Stream was among four soldiers killed late last month when a roadside bomb exploded near their vehicle in Kandahar.

Stream graduated in 1987 from Davis County High School in Bloomfield. His funeral will be held tomorrow in Kentucky.

Stream is survived by a wife and two daughters.