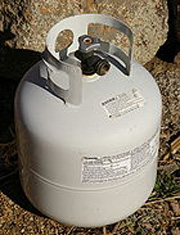 One Republican calls it a tax on backyard barbecues. A bill that cleared a House committee last week would raise the fee that’s charge on propane.

The Iowa Propane Education and Research Council’s activities are currently financed with a one-tenth of one cent fee on every gallon of propane sold in Iowa. The bill would raise that to two-tenths of a cent to raise more money for energy efficiency project.

Representative Chuck Soderberg, a Republican from Le Mars, says while that’s a tiny increase, it’s still a bad idea. "You know, I want to do whatever we can to promote energy efficiency, but at the same time that can be done now within the current structure and not increase fees to the people that do use propane," Soderberg says.

About 70 percent of rural Iowans use propane to heat their homes and bill backers estimate the average cost of heating an Iowa home with propane would increase less than two dollars a year if the fee goes up to two-tenths of a cent per gallon. The fee increase would raise about 375-thousand dollars a year, which would be used for energy efficiency programs for Iowans who use propane to heat their homes.