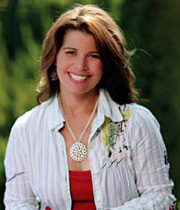 The Iowa woman who hosts a how-to show airing on two cable TV networks is branching off in a new direction — to make a documentary on American success stories.

Michele Beschen, who’s seen on the program "B. Original" on DIY and HGTV, is working to create what will be called "Fuel Your Greatness."

Beschen says: "We’re bombarded with so many negative, worrisome things for people — with jobs, the economy. This is an opportunity for people to self-reflect and really celebrate what’s going on in their life that is great."

She’s asking for people to submit their stories of achievement, adding, greatness is not a destination but a journey.

"We all have something that we can celebrate," Beschen says. "Greatness comes in a lot of different shapes and sizes and we’re looking for all of those stories. It’s going to be interesting to hear how people do define their greatness." Beschen and other panelists will chose five stories to feature in the documentary and each person will get a thousand-dollar prize. She says greatness is a relative term that for some people can mean completing a 5-K race, planting a garden or launching a charity.

Beschen says: "Whatever makes you feel great as a person, whether that’s your parenting skills, whether that’s some goal you’re achieving, whether that’s how you’re helping others. Maybe it’s something that just affects you personally. There are so many different directions you can go with it. It is open to everybody."

She says it’s still not known where the documentary will air. To enter, visit the website: " www.naturemade.com ". Beschen’s show, "B. Original," is based and shot in a farmhouse in the central Iowa town of Van Meter.