You are here: Home / News / NIACC drops football as part of budget cuts 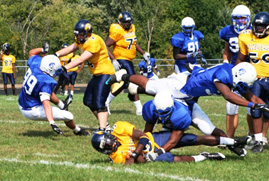 North Iowa Area Community College announced that they are dropping the school’s football program due to the statewide budget cuts that are having an impact on the college.

The college needs to trim $800,000 from its budget after the governor’s call for a 6.5% cut in funding for community colleges as well as the earlier announcement of a 1.5% cut from the current fiscal year budget.

The college expects to save $171,000 by cutting the program. NIACC president Debra Derr says this is one of a number of tough budget decisions for the school. Derr says the athletic department was one that was asked to look at cuts and football was chosen for many reasons.

Derr says they wanted to make the announcement about the football program now in trying to help the students decide their future. She says the decisions impact student lives and their families and she says the goal was to let them know early enough to help them find another school if they want to continue playing. "We did not want to shortchange the students," she says.

NIACC athletic director Dan Mason says it was one of the toughest decisions that he’s ever had to make. Mason says, "We’ve had a long and proud tradition in football and certainly up until recently, we were looking toward a bright future." He says they are not immune to what is going on around them as all businesses in North Iowa are facing tough economic times and they had to make a tough decision.

Mason says they will help players as much as they can. He says they will do their best to support the students and "cast a vision for the future of the athletic department." But he says "today is a very sad day."

NIACC has played in recent years in the Midwest Football Conference, a league that has not only included Iowa Central and Ellsworth in Iowa, but schools in Wahpeton North Dakota, Grand Rapids Michigan and three schools in Illinois. Mason says the costs of playing in the league were too much to handle in tough budget times.

Mason says it was obvious that they have gone away from playing teams two hours away, and he says at the time expanding the league was the best decision for the league, but he says one of the factors in dropping football was the conference was "not of reflective of who we are as it used to be.

The NIACC football program has been in existence since the 1940’s. Last season’s roster listed some 63 players. One of the notable recent players to come out of NIACC is Marshal Yanda, who went on to play for the University of Iowa and was drafted by the Baltimore Ravens in 2007.