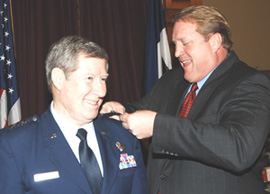 The leader of the Iowa National Guard has been promoted to the rank of lieutenant general.  Ron Dardis announced last fall that he planned to retire this year.

Today, the governor pinned a third star on the formal Iowa Air Guard uniform Dardis wore for the private ceremony.

Dardis spoke with statehouse reporters shortly afterwards. "I told the governor earlier I view this as a family promotion and one of an Iowa Guard promotion because without the love and support and sacrifices of my family over 40-some years and the dedication and commitment and hard work of the men and women of the Iowa Guard, this would not be possible," Dardis said.

"So I thank my family and the men and women of the Iowa Guard for their strong support."

Governor Culver has nominated Colonel Timothy Orr to replace the retiring Dardis, who is 65 years old.  Dardis, though, will continue to work in state government, serving as the executive director of the Rebuild Iowa Office.