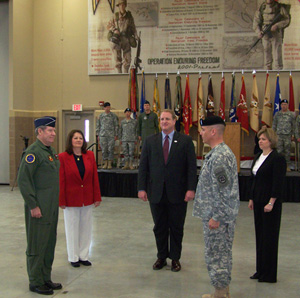 The leadership of the Iowa National Guard changed hands Thursday in a ceremony at Camp Dodge in Johnston.

It was the 28th time the command of the state’s national guard has been passed from one general to another since the organization was created in 1839.

This time retiring Lieutenant General Ron Dardis passed the flag of command on to brigadier general Timothy Orr. Dardis took over the top spot in the guard 10 years ago.

“Serving as the Adjutant General of Iowa has been an opportunity of a lifetime, and I thank everyone here who has played a role in supporting me in this endeavor,” Dardis says. Dardis also thanked his wife Carmel and family for supporting him.

Orr was born in Winterset and raised in Earlham and Boone. He is married to Suzanne Orr and has a son and daughter. Orr joined the Iowa Army National Guard after graduating from Boone High School in 1979, and rose up through the ranks while serving tours of duty in Iraq and Afghanistan. 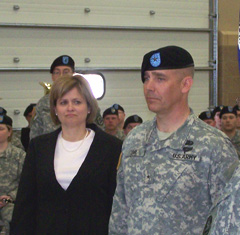 Orr says, “Being afforded this awesome responsibility of commanding the Iowa National Guard is truly a humbling experience,” Orr said, “I realize that I’ve been entrusted with the leadership and the care of our nation’s most precious resource — the soldiers and airmen of the Iowa National Guard, warriors and your families.”

Orr spoke to governor Chet Culver: “It’s my assessment that the Iowa National Guard is strong, it’s Iowa strong, and I want everyone to know that I am committing all my energy, my effort, my heart and focus, to ensure that the Iowa National Guard is agile, adaptive and prepared for any mission, and that we are always ready in the event that Iowa or the nation calls.”

The new commander also spoke to the soldiers he now commands. Orr says it’s an honor to serve with his fellow soldiers and says there’s no higher privilege than being allowed to serve with “such wonderful Americans.” General Dardis is retiring from the Iowa Guard, but has taken over as the head of the Rebuild Iowa Office.

Listen to the full comments of Dardis and Orr through the links below.