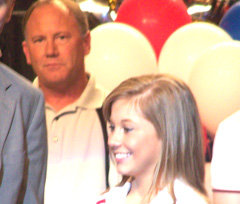 A 34-year-old Florida man is being held in a California jail for "stalking" 17-year-old Shawn Johnson — the Iowa gymnast who won gold at the Olympics.

Johnson is in Los Angeles right now as one of the contestants on the A.B.C. television show "Dancing with the Stars."

According to police, Robert O’Ryan drove from Florida to L.A. and jumped the fence outside the studio on Monday afternoon to try to get to Johnson.

He was stopped by studio security. Police found two loaded guns inside O’Ryan’s car, as well as duct tape and other materials which could have been used in a kidnapping.

There were love letters to Johnson in the car, too, and O’Ryan told investigators he believed Johnson was speaking to him through the TV and they were destined to have a child together. On Wednesday, Johnson’s family got a restraining order against O’Ryan. Johnson’s family has also hired a bodyguard for the gymnast’s protection.

You can see a of the restraining order here .