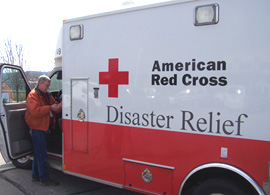 Bobbi Bishop, spokesperson for the American Red Cross of Central Iowa, says the flooding along the Red River has gone from bad to worse.

She says the National Red Cross sent an urgent request to Iowa chapters this morning requesting both personel and vehicles in Fargo.

"The Emergency Response Vehicle from Fort Dodge will be going up tomorrow morning, as well as the one here in central Iowa," Bishop said.

Dave Clark of Urbandale is one of the volunteers taking an Emergency Response Vehicle, or ERV, to North Dakota. "We can feed mass quantities of people right on the flood scene and take the food right to them," Clark said. Ron Dickerson, director of emergency services for the Central Iowa chapter, was busy preparing the ERV – which resembles an ambulance – for the 475 mile trip.

The vehicle is equiped to serve up to 5,000 meals per day. "If it’s not used in a feeding operation, then they’ll use it to haul bulk supplies for the needs of the clients," Dickerson said. "It’s mainly a cargo vehicle, it’s a very versatile vehicle." This morning, Fargo police issued a mandatory evacuation of a large area as the river moved more than 22 feet above flood stage and threatens to inundate the city.

"Today, the emphasis is changing to not only feeding, but also sheltering," Dickerson said. "They’re expecting to shelter quite a number tonight as the river went out of the banks early this morning." Police issued the evacuation order because of "seepage" in one of the levees. Bishop says, with the four additional volunteers, there will now be 11 Red Cross workers from Iowa helping in Fargo.

"Because we are so close to North Dakota, we anticipate there will be more Iowans deploying," Bishop said. The Red River, which runs between Fargo and Moorhead, Minnesota, is expected to crest at 43 feet Saturday. That would exceed the previous record height of 40 feet in 1897.