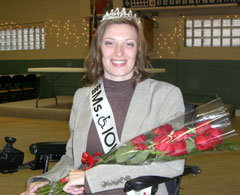 The simple act of filling a car’s gas tank is nearly impossible for some people with physical disabilities — especially those in wheelchairs.

Twenty-six-year-old Angie Plager was crowned the new Ms. Wheelchair Iowa over the weekend and plans to make the accessibility of the state’s gas stations one of her first awareness projects.

Plager says: “I personally drive but I still need help getting ready for the day, but I can drive to all my appointments. I can go to all my meetings, but I can’t refuel my vehicle by myself.”

Plager, who lives in the central Iowa town of Cambridge, was injured in a 2003 car accident that left her a quadriplegic. She’s able to drive a modified vehicle using hand controls anywhere she needs to go, but when it comes to refueling that van, the metal gas nozzle is too heavy for her to lift alone.

There’s another problem at the pumps. “The buttons are too high on the gas pump itself,” Plager says. “I can’t reach the buttons to push a credit card number or anything like that, I just can’t reach ’em. I’m too short.” She says if gas stations would outfit just one set of their tanks with a simple device called “Fuel Call,” it would enable drivers with disabilities to become loyal patrons.

“It’s an invention — basically, it’s a larger button,” she says. “It actually comes off of the fuel pump itself so you can reach it. It’s lower and this also goes back to the full-service stations and tells when people are available to come help you put gas in your vehicle.”

While full-service gas stations are about as common in Iowa now as Edsels, Plager says she also wants to change how gas station and convenience store employees are trained, as many of them aren’t aware they’re legally obligated to lend a hand to those who can’t pump their own fuel.

She says, “By law, if there is more than one employee at a gas station, the other one is supposed to be able to come out and help you pump gas, but in the training of employees at gas stations, they don’t know that, so it’s a huge oversight.” In one of her jobs, Plager is an “independent support broker,” someone who helps people with disabilities use an allowance of public funds to gain their independence.

Plager was crowned the new Ms. Wheelchair Iowa on Saturday in an event in Iowa City. It’s not a contest based on external beauty, but is based instead on a woman’s accomplishments since the onset of a disability, in addition to communication skills and other elements. For more information visit the  Ms. Wheelchair America program website.