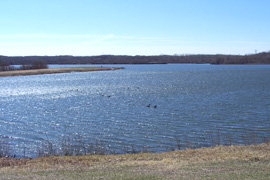 The U.S. Environmental Protection Agency is giving Iowa State University three grants to target the Raccoon and Boone Rivers and Walnut Creek for the reduction of pollutants that flow downstream to the Mississippi and the Gulf of Mexico.

The E.P.A.’s Art Spratlin says each of the three watershed projects is getting a $200,000 grant to evaluate conservation practices. Spratlin says the three projects give Iowa State the chance to evaluate different approaches to agriculture that will first of all improve things locally.

Spratlin says the dead zone was created because fertilizer, sediment and other pollutants rob the zone of oxygen that flowed from the throughout water basin.

Iowa Department of Natural Resources director, Richard Leopold, says these grants are different from normal. Leopold says they take a look at practices versus performance, and really centers on performance.

"Where a lot of times we will subsidize practices and look at ways to do things better, which needs to be done, this really focuses on implementation and performance. How we get better performance in using the landowners and their ingenuity, their creativity to get us where we want to go," Leopold says.

Leopold says the plan will ask those at the source of the issue to help with the solution. He says it’s meant to spur the creativity of the landowner, how to do it best, as he says the landowner knows how to best prevent the pollution.

Leopold says they are looking for ways which they can model, where they will pay for performance. Iowa State researchers say they expect to get the three projects underway in July. The grants were announced in a ceremony along the Racoon River in Des Moines Wednesday.