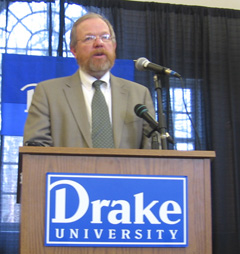 A best-selling author, who grew up in Des Moines, says he’ll always call Iowa his home – despite living in England the last 35 years. Bill Bryson returned to his alma mater, Drake University, Thursday to accept an honorary Doctor of Humane Letters degree, an Alumni Achievement Award and deliver a speech. Bryson also visited with members of the media and said as time passes by, he appreciates Iowa more and more.

"I’ve made a lot of jokes about Des Moines and Iowa and the great thing about it is that people realize it’s affectionate teasing. I’m really, really proud to be an Iowan," Bryson said. "There isn’t any place that I’d rather be from and people really seem to respond to that." The 57-year-old Bryson says one of the reasons he’s comfortable living in England is that the English people’s sense of humor is similar to that of Iowans.

"If you leave Iowa and go to other states, you find that people don’t have the same kind of sense of humor we do in Iowa," Bryson said. "I think in Iowa, the sense of humor is very much based on the idea of not taking yourself too seriously, making jokes that are directed at yourself, being self-depricating and that’s not true of a lot of other places." Bryson’s books have sold 10-million copies worldwide, but his most celebrated work in his home state is "The Life and Times of the Thunderbolt Kid." The memoir, released in 2006, chronicles Bryson’s adventures as a boy growing up in Des Moines in the 1950s and 60s. Bryson says the city has changed quite a bit in the last 50 years.

"But the real thing that hasn’t changed, and I mean this sincerely, is the friendliness of the people," Bryson said. "The kind of feeling of the city is kind of what it always was." A play based on "Thunderbolt" will debut at the Des Moines Playhouse this Summer. Bryson says he’s disappointed he won’t be able to see the production.

"I can’t imagine how they’re going to do it," Bryson said. The University of Durham, where Bryson is chancellor, will hold its graduation ceremonies at the time of the play’s run between the 12th and 28th of June. Several of Bryson’s books have involved extensive traveling. Currently, he’s working on book titled "At Home."

Bryson says he promised his wife he would write a book from home. "So, I decided I’d do a book about the home," Bryson explained. "The whole idea is that I’m just going from room to room around our house in England and writing about a history of private life as lived in various rooms. So, it’s a kind of history of the world without leaving home." Bryson and his wife have four children and four grandchildren. They live in the country outside of Norfolk, England. Bryson says it’s a relatively stress-free life.

"When I started out as a freelance writer, I quit my job in London and moved out to the country with my wife and we had two small kids at that time. All I wanted to do was make a living at it…just be able to pay the bills," Bryson said. "So, it’s turned out fantastically well. I’ve been really, really lucky." Bryson’s mother, who is 96, still lives in Des Moines.