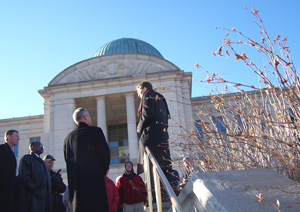 The Iowa Supreme Court has ruled the state law which forbids gay marriage in Iowa is unconstitutional. Six gay couples filed a lawsuit in 2005, arguing a state law which banned same-sex marriage was discriminatory.

This morning at 8:30, the court issued its ruling on the case as activists on both sides of issue stood waiting outside the Iowa Judicial Building — ready to speak with reporters on the scene.

Read Radio Iowa’s stories with supporters and opponents . Since 1998, a state law had stipulated that the only legally recognized marriages in Iowa are those between a man and a woman. Today’s ruling will allows same-sex couples to file for a license and get married here. State law does not require people who are married in Iowa to be Iowa residents, so couples from out-of-state may travel to Iowa to tie the knot.

Last year, a district court judge ruled the 1998 state law which banned gay marriage was unconstitutional. A gay couple from Ames obtained a license and were able to find a cleric to perform a marriage ceremony on the sidewalk in front of his home before the judge issued an injunction that put same-sex marriage on hold until the state’s highest court could issue its ruling. 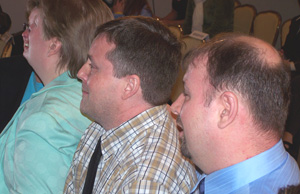 The justices on the Supreme Court heard arguments in this case on December 10, and the chief justice told court watchers it would be "months" before a ruling was issued.

With today’s ruling, it took the justices less than four months to decide and write the opinion which was released to the public and can be found online at the Supreme Court’s website.

On Thursday, legislative leaders from both parties said the 2009 legislature will likely adjourn for the year within the next week or 10 days without passing a bill in reaction to this ruling.

Opponents of gay marriage have been pressing for an amendment to the state constitution which would ban gay marriage in Iowa. If the 2010 legislature endorses the idea, November of 2012 is the earliest Iowans would be able to vote on that constitutional amendment.