You are here: Home / Crime / Courts / Opponents to gay marriage vow to push for Consitutional amendment 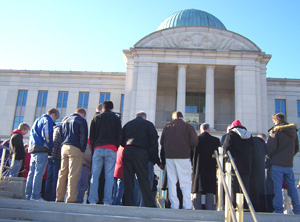 Opponents of gay marriage say their plan is to pressure legislators to act.

Reverend Keith Ratliff, a Baptist minister from Des Moines who is head of the Iowa/Nebraska chapter of the NAACP, is pushing for an amendment to Iowa’s constitution that would ban gay marriage.

"First of all, bottom line, we respectfully disagree with the Iowa Supreme Court ruling," Ratliff told reporters. "The bottom line is that we are going to continue on the same position that we firmly believe on, based on the word of God, that marriage is between one man and one woman and so we want to move this on."

If Iowa legislators, yet this year, were to pass a resolution endorsing an anti-gay marriage amendment to the state’s constitution, the issue still couldn’t be placed on the ballot until 2012.

"This is just one step of many," Ratliff said. "We certainly are not discouraged today even though the ruling did not go the way we feel it should go based on the word of God. We are going to continue to fight this thing because it is very important to the people of Iowa. It’s very important to all of us who are like-minded on this position that the things that have happened today do not stop us from believing what God has already ordained in dealing with marriage and dealing with man and woman, so we just move forward."

Danny Carroll, a former Republican legislator who is chairman of the Iowa Family Policy Center’s "Action Board," spoke with reporters on the steps of the Iowa Judicial Building. "We were told in 2005 that the law was on the books, that there was no need for a proposed amendment and now, today, we find that indeed there is a need for that amendment," Carroll said.

"A handful of people who were not elected to office — they were appointed — have rendered a decision, a decision that is contrary to the will of the people, it’s contrary to God’s law and it is time for the people through their elected officials and their elected representatives to decide what the law is going to be in this state."

Carroll drew a round of applause from the group which had gathered. "Courts do not determine law. The people determine law. This is government of the people, by the people and for the people," Carroll said, as Reverend Ratliff added an "Amen," and the crowd clapped. "It is the people. We are self-governed. We are not governed by courts and this should be before the legislature. They should act quickly and have it on the ballot so that people can vote on it in 2012."

Iowa Family Policy Center director Chuck Hurley spoke with reporters moments after reading the ruling. "I would cite specifically my greatest concern is that by force of law now every school child in every state school in Iowa, by force of law, will be forced to be taught that homosexual behavior is the equivalent of heterosexual behavior," Hurley said. "Every school child in Iowa will not be told that it’s not a mother and a father. It’s a significant-other or a spouse."