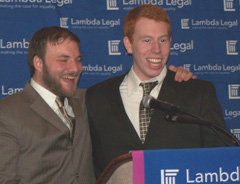 The six couples who brought the lawsuit challenging the gay marriage ban were not told the outcome of the Supreme Court ruling until they had all been brought to a Des Moines hotel ballroom for a news conference.

Camilla Taylor of Lambda Legal, which supported the couples’ case, announced the outcome behind an array of radio and television microphones.

"We won," she told the couples and the news media. "Not only that, it is unanimous, and you are getting married." The couples applauded and embraced. "Oh my God," one woman said.

Taylor continued: "In fact, you’re getting married very soon. The decision becomes effective in 21 days." Some of the gay couples kissed and photographers snapped pictures.

"Today dreams become reality, families are protected, and the Iowa Constitution’s promise of equality and fairness has been fulfilled," she said. "We are thrilled for the courageous families we represent and for all Iowans." Taylor is an attorney who had been involved in the case since it was filed in 2005.

"Family and fair treatment by government and taking care of our communities — all of these Iowa values were vindicated today and when we filed this case, these families told us that they would be treated with dignity and respect by their communities and they were right. They had faith in their state and they were absolutely right," Taylor said. "It is fitting that Iowa is one of the first states to recognize that all families should be treated equally and that same-sex couples have the right to marry."

Tim McQuillan and Sean Fritz were the only gay couple to get married before a Polk County ruling legalizing gay marriage was put on hold for the Supreme Court to hear the issue.

McQuillan spoke about the High Court ruling, with Fritz standing at his side. "I don’t know where to start. I’m just so happy," McQuillen said, emotion choking his voice. "All of these couples here, it seems like they’ve been together longer than we’ve been alive. No offense." The room erupted in laughter. "And they started families and it’s families like them who really feel the impact of what happened today," McQuillen said.

McQuillan and Fritz’s ceremony took place on August 31 of 2007 and they have waited since then for today’s ruling. "I’m just so happy that you all finally get what Sean and I have had a sense of for the last year and half," McQuillen said, turning to his partner. Fritz added: "Welcome to married life."

The crowd applauded. Iowa will become the third state to issue same-sex marriage licenses. The dozens of gay and lesbian couples who stood in line back at the Polk County Recorder’s office on August 31, 2007 and got a marriage license must re-apply.