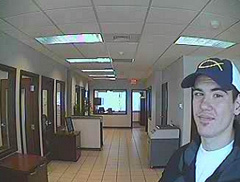 Police in Des Moines have some unusually clear pictures of a man they say robbed a credit union Friday afternoon.

The suspect, a young white male, is shown looking almost directly into the camera as he demanded money and then left with an undisclosed amount of cash.

“It seem like the technology is getting a lot better in recording still photographs and video too,” Valdez said. “Those are the kinds of things we need…to get a quick identification from the public who knows who this person is.”

Friday’s robbery at the Greater Iowa Credit Union in Des Moines was reported just before 1:30 p.m. The suspect, who did not display a weapon, was wearing a hooded, zip-up style sweatshirt. The robber was also sporting a rather distinctive blue and white ball cap. The hat features a symbol of the Christian fish.

“That would be pretty recognizable if he’s still wearing that hat,” Valdez said. The religious symbol is believed to have first surfaced at the end of the first century. “The symbol and the act of the robbery really don’t work together really well,” Valdez said of the suspect’s hat. “I don’t know what that person’s religious background or belief is, but the (robbery) and what he’s displaying are not going together very well.”

Anyone that recognizes the suspect is asked to call the Des Moines Police Department at (515) 283-4811.