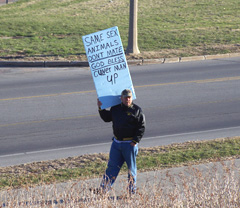 There has been heated debate in the state over the gay marriage issue, but things were relatively calm when the Iowa Supreme Court released its decision on the issue Friday.

Those who have fought against gay marriage in the state gathered in front of the Supreme Court building and prayed shortly before the decision overturing the gay marriage ban was released.

As for other demonstrations – -there was one man who quietly walked back and forth on the sidewalk in front the court building with a sign critical of gay marriage. On the other side of the issue, the six couples that brought the lawsuit gathered a Des Moines hotel.

The results of the ruling were kept from them so they could react in front of the cameras and reporters about 45 minutes after the release of the decision. There were tears and hugging that at times turned to cheers as the ruling was discussed.

Brad Clark led the Iowa campaign for Lambda Legal, which worked to get the law overturned. Clark answered questions about what might happen now. He says legislative leaders have been clear that they have important issues that they need to address so the constitutional amendment to ban gay marriage would not come up anytime soon.

But those on the other side says the constitutional amendment is exactly what they will push legislators to bring up before this legislative session closes.