You are here: Home / Human Interest / Trek stars beam down to Riverside in June 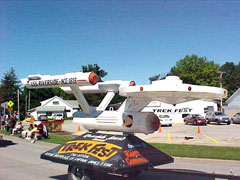 The tiny eastern Iowa town that claims to be the future birthplace of the fictional space hero Captain Kirk has a star lineup for this summer’s TrekFest.

Trekkies may think they’ve been zapped with a phaser on stun when they hear three stars from the original Star Trek series will be at this 25th annual event: Walter Koenig, Nichelle Nichols and George Takei, who played Chekov, Uhura and Sulu.

Tim Geerlings, vice president of the Riverside Area Community Club, also expects plenty of look-alikes, as one mainstay of Trekfest is the costume contest which, this year, will be judged by Koenig, Nichols and Takei.

It’s unprecedented to have three high-caliber names at the fest, and Geerlings says Koenig appeared at last year’s event. Geerlings says, "In spite of the fact it’s a small town atmosphere, he really rather enjoyed himself and he was the one who suggested we try to get the other two original crewmembers to come to Riverside."

He says there are all sorts of Trek-related events planned and they’ll even be selling "Kirk Dirt," taken from the spot where they say Captain James T. Kirk’s birthplace will be — in the year 2228. Geerlings says he’s had inquiries from around the planet and is expecting a large crowd to materialize.

There’s a lecture session on the history of Star Trek and its cultural impact, followed by a question-and-answer session with the three stars, then an autograph and photo session. They’ll also ride a float together in the parade.

For details on the June event, visit TrekFest .