You are here: Home / Crime / Courts / Gronstal: King "too chicken" to run for governor 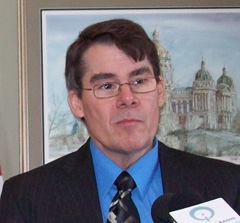 The top Democrat in the Iowa Senate is questioning the political fortitude of a former state senator who’s now a congressman.

Earlier this week, Republican Congressman Steve King said his dismay over the Iowa Supreme Court ruling that legalized gay marriage might prompt him to run for governor in 2010.

"Steve King’s too chicken to run for governor because he knows he’d get his butt beat," Gronstal says.

King mulled running for governor back in 2006, but decided to seek re-election to his seat in congress. The fifth district is Iowa’s most-Republican congressional district and King has served as the area’s congressman since 2003. He was a state senator for six years.

Late Thursday afternoon, King issued a one-sentence, retaliatory statement in reply to Gronstal:  "Senator Gronstal is afraid to allow a vote on marriage," King said. King’s making reference to Gronstal’s vow to block a vote in the legislature which would set the wheels in motion to allow a statewide vote on a constitutional amendment which would ban gay marriage.