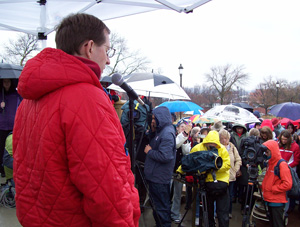 A few hundred Iowans stood outside the statehouse in a light rain late this morning to rally against gay marriage.

It’s the second time in five days that those who oppose gay marriage have flooded the statehouse grounds to voice the outrage at the Iowa Supreme Court decision which legalized gay marriage.

Chuck Hurley of the Iowa Family Policy Center led the group in prayer to start the rally. "Thank you for these people who sacrificed to come here today and may you bless them and encourage them and prompt them to stand for your truth forever, in Jesus’ name," Hurley prayed, and the crowd responded: "Amen." Bill

Salier of Nora Springs, a Republican candidate for the U.S. Senate in 2002 who leads a group called "Everyday America," helped organize the rally.

"Ladies and gentlemen, we’re here…to send a message to the folks in the gold dome behind us that we do not have to bow down to the robes of the Supreme Court simply because they dictate that we must," Salier said.

Salier urged those in the crowd who felt strongly on the issue to consider running against a legislator who supports gay marriage, or who has failed to support moves to place a constitutional amendment that would ban gay marriage before voters. 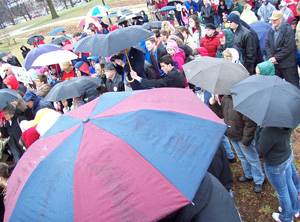 "We elect our representatives. And you know what? If we have a disagreement with them, we vote them out," Salier said, to applause. "…These people must feel the heat of the population and that is why we’re gathered here today."

Bob Vander Plaats, a likely Republican candidate for governor in 2010, challenged Democratic Governor Chet Culver to issue an executive order forbidding gay marriages in Iowa until Iowans can vote on a constitutional amendment which would ban same-sex marriage.

But Phil Roeder, a spokesman for Culver, says governors in Iowa do not have the ability to prevent or overturn a decision of the Supreme Court through an executive order. "It’s disappointing that some people, especially politicians, would try to mislead the public into thinking that governors do have such power," Roeder said in a statement.

The gay rights group "One Iowa" urged its supports to engage in a "virtual rally" and send email to legislators and the governor in support of gay marriage. The group’s executive director said "in tough economic times, (she couldn’t) imagine asking folks to take off work or school to attend a protest at the capitol."