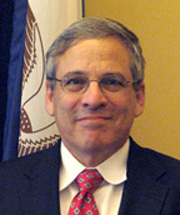 When pressed by a leading Democrat, Senate Republican Leader Paul McKinley said Gessow had failed to be "open and transparent" about a variety of things.

"Your theory of the indispensible man — I just can’t accept that," McKinley said during debate. "Everybody is replaceable."

Senator Matt McCoy, a Democrat from Des Moines, challenged Republicans to have "the guts" to stand up and give their specific reasons for voting Gessow down,

"Tell us why you cannot support this individual for confirmation. That’s all," McCoy said. "I think your silence is deafening."

Four other Democrats spoke in favor of Gessow, including Senator Daryl Beall, a Democrat from Fort Dodge who said a week ago he would have voted against Gessow, but Gessow — through his recent actions — had earned his support.

"I’m not convinced that he has all of that ‘vision thing’ that President Bush, senior used to talk about, that elusive ‘vision thing’ — but he is a hard worker," Beall said. "…I appreciate that in a public servant."

Midnight tonight is the deadline for senate confirmation votes on the governor’s nominees to state boards and commissions as well as the governor’s agency directors.

The top Democrat in the senate used a parliamentary move at the conclusion of this morning’s debate which means Gessow’s nomination could be resurrected later today if two Senate Republicans change their minds.

Read more about this morning’s senate action on The Blog or click on the audio link below to listen to the debate.