You are here: Home / Politics / Govt / Thousands turn out for "Tea parties" 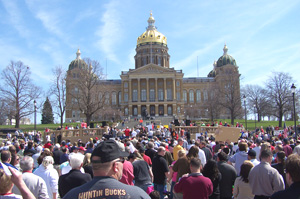 Iowans in a number of cities across the state rallied against tax day. That included a crowd of around 3,000 outside the Capitol building in Des Moines.

Organizers of the “tea parties” in Iowa and around the country said TEA stands for Taxed Enough Already. 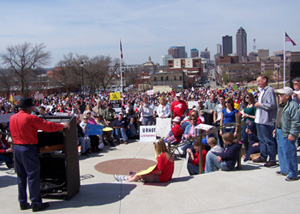 Reverend Charles Kirtley of Corydon criticized the state and federal welfare systems. “Meeting the needs of the poor and needy (is) what God commands. We should do that,” Kirtley said. “But, it’s much more efficient if we do it directly. If you give to a needy person and he needs more, you give it to him. If he don’t need as much, you can cut back.

Government bureaucracy just gives, gives, gives and just wastes…that’s the way I see it.” Des Moines business owner Vicki Stogdill says she’s upset with the level of state spending since Governor Chet Culver took office. “Instead of showing leadership, he wants to borrow more. That’s not the answer…they’ve on a two-year spending spree and it has to stop,” Stogdill said.

A group of fifth-grade girls from Ankeny were even given a chance to speak at the podium. One girl, introducing herself as Claire, read a quote from Ben Franklin, “we should not let the poor get comfortable with poverty, let’s get them off welfare.” Her friend, Megan followed, “we need limited government, stop spending our future.”

The crowd cheered, to which Megan replied, “thank you,” before jumping off a stepping stool to reach the podium-mounted microphone. Other speakers, including Tamara Scott, took aim at Culver and other Democrats for refusing to allow debate on a measure that could lead to a ban on gay marriage in Iowa.

Scott said Culver stated in the past that he would do “all he could” to keep marriage between one man and one woman. “It is time for us to stand strong on our word and keep our word, unlike the governor, and we will remember in November,” Scott said. In addition to the Des Moines rally, other “tea parties” were held or will be held tonight in Mason City, Sioux City, Spencer, Waterloo, Iowa City, Dubuque, Davenport, Council Bluffs and Cedar Rapids.

More information on the times and locations of the rallies is available at taxdayteaparty.com/teaparty/iowa