You are here: Home / Fires/Accidents/Disasters / Governor says it’ll be "a week or so" before ’09 session closes 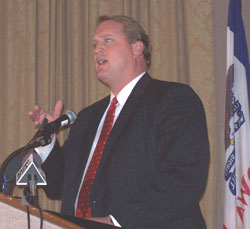 Governor Chet Culver says it will be "a while" before the 2009 Iowa Legislature can adjourn for the year.  Culver continues to press for a $750 million borrowing plan that would finance infrastructure projects.

"I’ve been very clear about the importance of getting this bonding initiative done for a number of reasons so, you know, we’re going to continue to work hard to get it to my desk," Culver says.

This past weekend, some Linn County residents expressed fears that the state will not advance a part of that borrowing plan that would provide money to the Cedar Rapids area and other flood-impacted areas of the state. Culver, a Democrat, says he’s hoping Republicans join with Democrats in support of that.

"I’m optimistic that we can get the votes necessary to pass the bonding bill, but we do have a lot of work that remains and I’ll be meeting with legislators on a number of issues and trying to secure some additional votes," Culver says. "It is important. I mean, we’ve got to help these flood victims. There’s $150 million at least that’s in the bonding package that would assist businesses and home owners that need help."

One proposal which has won House approval would require all out-of-state travel by state cmployees to be reviewed and approved by the state’s Executive Council. The governor and other statewide elected officials like the state treasurer and state auditor are members of the executive council. And Culver’s not lobbying to have the executive council review all out-of-state travel requests.

"I look forward to talking to legislators a little more about that specific proposal. It’s not one that’s on the top of our list right now," Culver says. "I think we have a lot of work to do on the budget, generally, so I think a lot of these type of questions will arise in the next week or so."

If the executive council were to approve all state employee travel requests, it would mean the coaches at Iowa, Iowa State and U.N.I. would have to submit requests to take their teams to out-of-state games.

"I wouldn’t read too much into it at this point,. It’s not something that I’m pushing but I’m open to having discussions about the concept," Culver says. "…I am in favor of trying to tighten our belt, so we’ll just see what happens on it."

The executive council met this morning and approved a series of items, including state agency memberships in a variety of national groups. For example,k the Secretary of State asked and received permission to spend $25 to join a national group of notaries public.