You are here: Home / Education / I-T Olympics underway at ISU 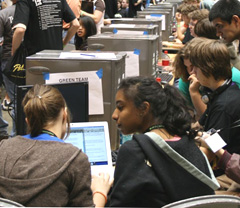 Some 350 young computer experts from 40 Iowa high schools are ready to duel today in Ames at the annual statewide I-T Olympics.

Doug Jacobson, a professor of electrical and computer engineering at Iowa State University, says the teens will be taking part in three categories of information technology, the first of which involves Lego-block robots each team has carefully assembled for battle.

Jacobson says, “The robotics competition is sumo wrestling and they each come with a sumo-wrestling robot and they place the robots on the mat, start ’em up and they have to find their opponent and try to push them off the mat.”

The students are also showing off their gaming designs as they’ve created entertaining, educational games that teach science and math to middle schoolers. Jacobson says the most popular event during the two-day I-T Olympics involves internet security, as the students are setting up servers and tweaking their electronic firewalls to fend off hackers.

The cyber defense competition has the kids very excited, he says, as it’s a very fast-growing field that gets a lot of media attention due to new attacks, viruses and worms that can strike a company or the country. Jacobson says the kids thrive on the competition and trying to best other teams from around the state, but he admits there’s an underlying motive in the contest.

“During the Olympics, we’ll have companies there that’ll be able to talk to the kids about potential careers,” Jacobson says. “We’ll have people from universities and community colleges to talk to them about the educational path that they would take and the whole goal is to get more kids interested in I-T and eventually into the I-T workforce.”

Competition in all three events runs today from noon to 8 P.M. and tomorrow 8 A.M. to 6 P.M. at I.S.U.’s Hilton Coliseum.