You are here: Home / Business / President talks with workers at Newton plant 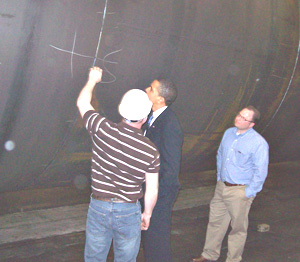 President Barack Obama’s Earth Day visit to a plant in Newton that makes the towers for wind turbines started with a tour of the facility.

Thirty-four-year-old Jaison Jackson was one of two plant workers who spoke with Obama during his tour of the plant.

Shortly after the tour, Obama spoke to an invitation-only crowd of about 200. Richard Mulbrook, the plant’s manager, was emotional as he introduced Obama and spoke about the plant’s former life as a Maytag plant where washers and dryers were made.

"I remember when I got let go from Maytag — the plant was closing. It was a tough day for Newton. I worked there for 22 years and I wasn’t sure what I was going to do afterwards," Mulbrook said. "Out of the blue, Trinity showed up…They came in here and made it happen in a very short time." 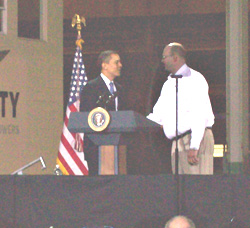 Barney Brown also worked at Maytag, assembling Neptune washing machines for eight years. Like many others,

Brown was wearing a white hard hat and a blue work shirt with the plant logo for Obama’s visit. "I’ve been here for seven months and the transformation is just unbelievable, turning this dead space into what we have now," Brown says.

"I love my job and I think a lot of other people will, too, because I think we’re just going to keep growing and growing."

Obama told the crowd it’s time for a "new era of energy exploration in America," to find new sources of energy. Obama also said it was time to further develop this country’s wind energy industry, as many other countries have a head start. Denmark, for example, gets 20 percent of its electricity from wind-power sources.

Click on the audio link below to listen to Obama’s speech.