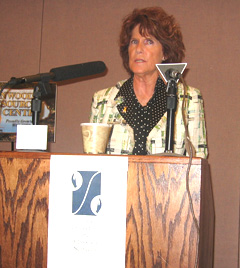 A spokesperson for the Department of Human Services says the agency is correcting past problems at the Glenwood Resource Center.

The facility in western Iowa serves persons with intellectual disabilities, but has been fined several times for poor conditions and treatment of residents.

D.H.S. spokesperson Roger Munns says conditions have improved at both Glenwood and the Woodward Resource Center.

He notes that the U.S. Justice Department recently announced that Woodward is in full compliance will all care standards. "I mention Woodward because we know that Glenwood is not far behind," Munns said.

But, an advocacy group for the disabled is calling on state officials to close the Glenwood facility and transfer oversight and management of services to citizens with mental disabilities from the D.H.S. to the Department of Public Health. Sylvia Piper is executive director of Iowa Protection and Advocacy Services.

"In the whole scheme of things, we believe the Department of Human Services is very broken," Piper said. "It definitely needs to be re-configured and reorganized." She’s calling for the closure of Glenwood within the next 30 months and asks that the institution cease admitting disabled residents immediately.

Piper believes the resources spent at Glenwood should be reallocated to support community-based programs that help persons with disabilities. Munns says the D.H.S. is committed to transferring people with disabilities to home or community settings "when it can be done with safety and dignity."

He says a 50-million dollar federal grant, awarded two years ago, has helped the agency develop community options. In addition, Munns says – over the last five years – the Medicaid Waiver Program has allowed "dozens of people" to leave both facilities in Woodward and Glenwood. Munns says the residents that do remain in the institutions have "enormous needs," but the goal is to return individuals to their community.

"While both of our institutions continue to admit new residents who need services, our overall population is in steady decline," Munns said. Piper, meanwhile, describes institutional living as "old technology." She’s asking lawmakers to create a new Department of Disability Services.

"The new department’s first charge would be to develop a comprehensive state plan that reinforces a commitment toward the goal of ensuring a fulfilling and quality life for people with disabilities," Piper said. She notes that the other 49 states have closed 155 institutions for residents with intellectual disabilities. Piper says it’s time for Iowa lawmakers to follow suit and shutdown Glenwood.

"Iowa has over the course of many years studied, in my personal opinion, to death – all issues related to disabilities over and over and over…forming committees for one thing or another and yet, with no conclusion," Piper said. Munns insists that the D.H.S. and Glenwood staff have improved both conditions and care at the facility and Iowans can find out for themselves.

"We’re inviting people to see for themselves, if they’d like to," Munns told Radio Iowa. "Lots of legislators have gone to both (Glenwood and Woodward) this year…and you can see the commitment for yourself." The full report issued today is available at the  Iowa Protection and Advocacy Services website .