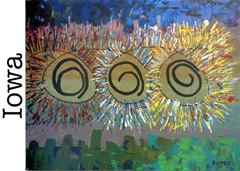 A small abstract painting from of an Iowa City physician and artist is being featured in a national exhibition opening today in Las Vegas.

The National Invitational Postcard Exhibit includes artwork on postcards from each of the 50 states. Artists from across the U.S. were invited to create a postcard image about the place where they live.

The work "Passing Storm" by Dr. Michael Kienzle was chosen to represent Iowa. "It conveys the passing of a storm from stormy to clearing and then, on one part of the image, it’s all the bright colors of a clear day after a storm has passed through," Dr. Kienzle says.

"I picked that image because the weather’s a big deal in Iowa." There’s a Chinese proverb on the back of the postcard, reading: "Spring weather is like a child’s face, changing three times a day."

Painting is a hobby for Kienzle, who’s "day job" is working as a professor and cardiologist at the University of Iowa. He says he creates a postcard-sized work of art every weekday and adds an appropriate message. Kienzle says he emails the pictures and attached quotations to a wide array of people daily, something that started out as a way to keep up with family and friends.

"Actually, now it’s people I’ve met on airplanes and the list is maybe 600 people or so," Kienzle says. "It’s a way for me to communicate with people and also to let them know what my painting is doing. It’s a very enjoyable exercise."

He’s created hundreds of daily drawings, paintings and photographs over the past few years. After having avoided anything but medical-related pursuits for much of his professional life, Kienzle says he stumbled upon this new hobby several years back at an Iowa City frame shop that also carries art supplies.

"I saw that they were selling small painting starter kits and I figured it’s so inexpensive that even if I threw it away, it wouldn’t be a major loss," Kienzle says. "So I started painting and after a while my wife said they weren’t too bad and put some frames on them and before I knew it, people were buying them." The exhibit in Las Vegas runs today through July 2nd. To see more of Kienzle’s work, visit his website.