You are here: Home / Politics / Govt / Iowa Lottery teams up with Tourism for promotion 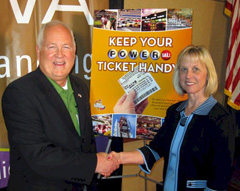 The Iowa Lottery is teaming up with state tourism officials to promote some of Iowa’s entertainment hot spots.

Lottery CEO Terry Rich says anyone that buys a Powerball ticket through May and June can use that ticket as a coupon to a venue that will be identified on the Iowa Lottery website.

The lottery introduced eight businesses Friday that will be featured in the promotion. They are Honey Creek Resort State Park near Moravia, King’s Poite Resort in Storm Lake, the Iowa Speedway in Newton, Adventureland in Altoona, Fun City in Burlington, Marriott Hotels across Iowa, Riverboat Twilight in Le Claire and the Mississippi River Museum in Dubuque.

"The whole concept is Iowans helping Iowans, rather than worry about the federal government or anything else," Rich said. "It’s businesses and attractions helping fellow Iowans to save money, stay in Iowa and spend their money in Iowa." The slogan of the campaign is "Keep Your Powerball Ticket Handy."

Rich says interns with the Iowa Lottery will spend time at festivals, fairs and events this summer handing out prizes and coupons to Iowans that can display a current Powerball ticket. The promotion is only scheduled to last through June, but Rich expects that’ll change.

"When we put together the promotion, we put it together for May and June as a phase one. We didn’t how many people would sign up and give discounts," Rich said. "But the way it’s going now, we probably will extend it into July and August. We’ll make that decision by mid-May."