You are here: Home / Business / Governor gets "signature" request: money for "I-JOBS" 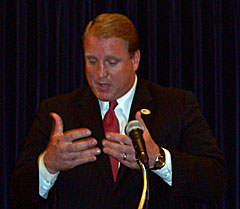 According to Culver, there are hundreds of infrastructure projects that are "shovel-ready," everything from sewers and roads to water quality initiatives.

"This is going to have an immediate, ripple effect on the state in a very positive way," Culver said.

But Senator Shawn Hammerlinck, a Republican from Davenport, says the sheer size of the borrowing plan boggles the mind.

"Holy cow," Hammerlinck said Saturday, "to be that self-righteous, to be that arrogant, to have your heads that big and actually believe that you can spend that amount of money is appauling."

Every Republican in the legislature voted against the plan, calling that level of debt financial suicide for future generations. Governor Culver, a Democrat, rejects the Republicans’ complaints.

House Democratic Leader Kevin McCarthy of Des Moines says the "I-JOBS" plan is about being "bold" in the face of adversity.

"Iowans, I think, when the economy’s tough, they want to make sure that you’ve in motion, you’re willing to make tough decisions," McCarthy says, "…so we’re pleased with what we’ve been able to accomplish given the very challenging economic situations that we’ve been in this year."