You are here: Home / Politics / Govt / Gay couples line up to get marriage licenses 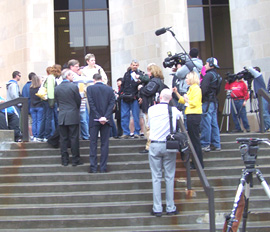 Today is the first day that gay couples can apply for marriage licenses in Iowa and around one dozen gay couples lined up at the Polk County administration building just before six o’clock this morning waiting for the doors to open.

Andrew Mahoney-Lamb and his partner Grant Lamb were the first in line, but didn’t plan it that way.

“No, we figured there’d be a lot of people here, so we figured we’d show up early and try to beat the rush,” Mahoney-Lamb says. Mahoney-Lamb talked his feelings about the wait. “Anxious, I just want to get it over with and have the piece of paper in my hand to show me that it’s actually true,” he says. Lamb says it’s important to them to see the license.

“Definately once that paper is signed, it’s sealed, then the reality will hit. That’s really what we’re waiting for, the seal from the recorder that says it’s all true,” Lamb says. The two say they’ve been a “couple” for three years and had a commitment ceremony a year ago. Ingrid Olson and Reva Evans waited in line with their son Jamison.

“You know walking up the stairs today, I mean, I got a big pit in my stomach,” Olson says. “I got a big smile on my face,” Evans says, “and it was just like, like I didn’t expect it, it was pretty powerful, it was just a great feeling.” Olson and Evans had tried to get a license four years ago, and were one of the couples who challenged Iowa’s gay marriage ban after being denied.

Olson says they have to reapply and there are couples who have their money in escrow who apply in 2007, but she says when they applied they were told marriage was between one man and one woman and the recorder wouldn’t accept their fee. Some couples applied for licenses in 2007 after a Polk County judge declared the state marriage ban unconstitutional, and then those cases were put on hold as the case was appealed to the Supreme Court. 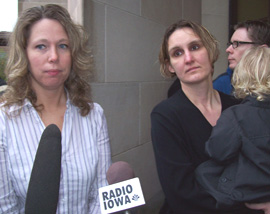 At least two of the couples in line today were from out of state. Chris Tabor drove in from Jefferson City, Missouri with his partner Rusty Warning.

“We’ve been together for nine years — and for us when we heard the news — it was just a matter of planning the arrangement and coming up to Des Moines and getting it taken care of,” Tabor. Warning says it was an easy decision once they heard the Iowa Supreme Court Decision.

He says it was an instantaneous decision and the only question then was when they would be able to get off work to come to Iowa. Their marriage won’t be recognized back in Missouri, but Tabor says they don’t care. Tabor says,”It matters to us, that’s really why we are doing it. And we’re glad to see a state in the midwest do this, so we’re really happy about it.”

Both say they doubt Missouri will allow gay marriages anytime soon and both said they don’t care to lead the fight for gay marriage in their home state.

The law requires any couple who get a marriage license to wait three days before getting married, but they can request a waiver.