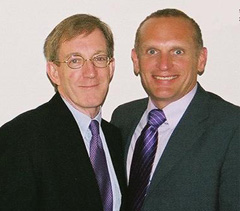 Same-sex couples will be allowed to legally marry in Iowa for the first time today following a landmark ruling from the Iowa Supreme Court earlier this month.

County courthouses statewide are expected to be much busier than normal as gay and lesbian couples rush to get marriage licenses and tie the knot.

The 55-year-old magazine editor says he and his soon-to-be-spouse, Patrick Phillips, will go from the courthouse to their church where the minister who united them in a religious service three years ago will repeat the process.

Then, he says, they’ll head back to the courthouse in downtown Des Moines to be among the first gay couples in Iowa to have their marriage license registered. Aside from the romantic implications of being united through a wedding ceremony, Schrock says the legal ramifications are also important — especially when it comes to things like death and taxes.

"It affects us in a number of ways, not the least of which is taxes, when we can file jointly or separately and the sort of deductions we can take," Schrock says. "It also affects us as far as our ability to visit each other in the hospital."

Once the state recognizes their partnership, should one of them fall seriously ill, the other will be able to make end-of-life decisions, something that would have likely taken a legal battle before the April 3rd state Supreme Court decision.

The state has issued an order that county recorders follow the court’s mandate, though some county recorders reportedly vow to resign rather than to issue marriage licenses to same-sex couples. It’s expected Iowa’s most populous county, Polk, will be the busiest of the state’s 99 county courthouses today. Schrock and his partner are prepared for a wait.

"We do rather anticipate that there will be a line," Schrock says. "I don’t expect thousands but maybe dozens of people there waiting to take advantage of this opportunity. I know many, many people have been waiting a long time for this."

Opponents of gay marriage are in the process of launching an effort that would bring about an amendment to the state constitution banning the practice. Schrock says there’s concern for a repeat of what happened in California, but he hopes the effort to overturn the same-sex unions in Iowa is diffused.

"Once the marriage equality is in process, people will see that their world does not dramatically change," Schrock says. "The change really only occurs for those couples who are finally able to have marriage equality and we believe Iowans are very fair-minded and will understand and realize that this really is a matter of equality for all."

Lambda Legal plans to have observers at some two-dozen county recorders’ offices in Iowa today, though officials with the group say no trouble is anticipated. The Chicago-based firm was at the center of the lawsuit that resulted in the state high court’s ruling that the Iowa law which proclaimed marriage is only between a man and a woman is unconstitutional.