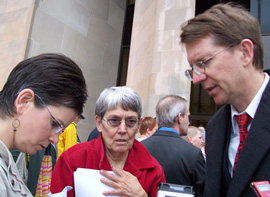 A prayer vigil was held at the Des Moines County Courthouse in Burlington this morning by those who oppose gay marriage.

But in Des Moines at the Polk County Courthouse — a sort of epicenter for the debate since the court ruling which legalized gay marriage involved Polk County’s Recorder — there was no prayer vigil.

"We read the petition to the county recorder and they also understood that we would provide free legal defense if they would adopt the conscience clause and if they refuse to issue based on their right of conscience which has been recognized since before the Declaration of Independence in this country," Hurley told reporters.

Hurley spoke briefly with two women who were there outside the building, each clutching several pages of petition signatures, urging the Polk County Recorder to refuse to issue same-sex marriage licenses. Julie Holthaus of Ankeny brought signatures from those who attend the Word of Victory Outreach Center in Ankeny.

"My pastor just wanted us to just take a stand for what we believe," Holthaus says. "God teaches in the Bible that marriage is between a man and a woman."

Hurley — of the Iowa Family Policy Center — told reporters that is a "truth" which is "uncomfortable" for the rest of the pro-gay marriage crowd who’d gathered outside the county courthouse this morning.

"This is about way more than recorders. This is about millions of Iowans being forced to accept something that they don’t believe in," Hurley said, and the woman standing beside him added an "Amen" to punctuate the point. "And so what do we the people do about our right of conscience? We petition the county recorders, kind of last-ditch effort. And then, where do we go from here? We ask, simply, for the right to vote."