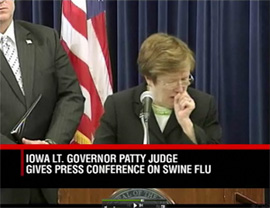 Video of Iowa’s lieutenant governor having a coughing fit during a news conference about swine flu made late night television last night.

Radio Iowa referenced the coughing episode on Monday afternoon, telling our listeners Lieutenant Governor Patty Judge had to step away from the microphone because of a coughing fit.

"I do not have it," Judge told the crowd of reporters in the room.

The video of Judge’s coughing fit was shown Tuesday night on the Late Show with David Letterman on CBS. The crowd laughed and clapped wildly as they saw Judge cough during that news conference about swine flu.

Letterman added this quip: "That’s a confidence builder, isn’t it?"

Letterman also made a crack about the person standing behind Judge in the video. Letterman called him "that guy." It was Governor Chet Culver, shown from about the nose down as he was standing behind the lieutenant governor’s right shoulder. In the video you can see Culver making a drinking motion with his hand, suggesting someone in the back of the room should get Judge a glass of water.

Click this link if you want to watch the video.