You are here: Home / Education / Schools have another year to comply with "Healthy Kids Act" 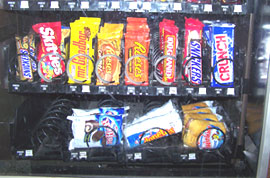 The state Board of Education is putting in place some controversial new nutrition standards for Iowa schools — but they will not take effect immediately.

In 2008, the Iowa Legislature passed The Healthy Kids Act to combat obesity. But implementing the law and trying to limit the amounts of fat and calories students may consume in the state’s public schools has been tricky.

Carol Gretta, legal counsel for the Iowa Department of Education, says school administrators need more time to work with the companies that supply the food for cafeterias and vending machines in Iowa’s public schools.

“So we’ve given schools another year,” she says. “These (rules) will not be effective until the 2010-11 school year and we’ve lightened up on the standards — especially for secondary students.”

That means high schoolers. The new rules do not regulate bag lunches brought from home or the items served at concession stands during after-school events. The Board of Education has also changed the rules to allow for more types of yogurt and caffeine in high schools.

“We did not want to have standards that were so restrictive that we would only serve to give kids incentives to bring cold lunch or to run across the street to McDonald’s or to a convenience store for their meals,” Gretta says.

The 2008 Healthy Kids Act also calls for at least two hours of in-school exercise a week for elementary and high school students.