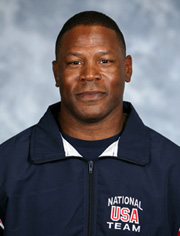 Iowa state has a new wrestling coach. Kevin Jackson will be introduced later this morning in Ames. Jackson was part of the Cyclone team in 1987 that won the NCAA championship.

He has not been a collegiate head coach but From 2001-2008, Jackson worked for USA Wrestling as the National Freestyle Coach. his competitive career was capped off when he won a gold medal at the 1992 summer Olympics.

He replaces Cael Sanderson, who resigned to take over at Penn State.