You are here: Home / Human Interest / Iowa native dismisses report he may go to moon 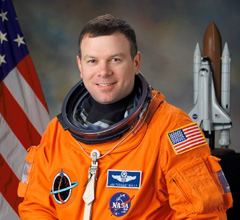 A reputable magazine has published a list of astronauts it says are likely to be destined for the moon, a list that includes an Iowan.

Air & Space Smithsonian lists about a dozen astronauts who are contenders for NASA’s next big mission to the Earth’s nearest neighbor.

Burlington native Jim Kelly says he’s seen the article that carries his name and picture and if he’s going to the moon, it’s news to him.

“I don’t know where that came from,” Kelly says. “Certainly, nothing official has come to me. As a matter of fact, not just that, but there’s no way we would have chosen people for that yet anyway. We’re still talking about six years off with a lot of changes and we’ve got a lot of stuff happening before then. At this point, we haven’t even assigned the initial group of people that are going to be trained to go fly.”

The 44-year-old Kelly has flown two space shuttle missions, both as the pilot of Discovery, in 2001 and 2005. He does not yet have his third flight assignment. While he’d love to be assigned to Project Orion, he says he’s likely not in the space agency’s plans for the moon, Mars and beyond.

“When I first came (to NASA), I was all fired up about it, thinking that we’d be able to do that faster than we have,” Kelly says. “When I caught fire from the space program as a kid watching the initial moon landing, I naturally assumed back then that we’d just keep doing it so it’s surprising to me still that it’s going to take so long to get back there, but at this point, I’m probably not in the plans for the moon.”

Virtually everyone has heard the historic recording of what Neil Armstrong said as he first stepped on the moon in July of 1969 — “That’s one small step for a man, one giant leap for mankind.” Kelly was asked if he had ever pondered what he would say if he ever got the chance to walk on the moon.

“Never,” Kelly says, laughing. “Nope, that’s not something that ever occurred to me, to think about that kind of stuff. It would be far more interesting what you were going to do there than what you were going to say there, probably.” Under the current timeline, Orion is to start flying in about six years with Americans perhaps again making bootprints in moondust by 2020.