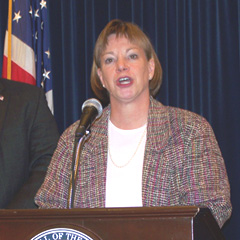 The top doctor in state government says the governor declared a public health emergency in Iowa this weekend so plans could be put in place to deal with what might turn out to be a big outbreak of the flu.

But Dr. Patricia Quinlisk, the state epidemiologist, admits there still is just one confirmed case of H1N1 flu in Iowa.

"To be honest, the declaration of the public health emergency is done to allow us to do several things as far as sort of technicalities and administration and getting some of the legal things taken care of," Quinlisk says. "So it’s done not so much because of what’s really happening, but just because it allows us to get prepared for what might happen in the future."

The Centers for Disease Control in Atlanta is where all the testing’s done to confirm cases of this new strain of the flu, and Quinlisk says because of the backlog, there are likely more "probable" cases of H1N1 in Iowa than the one that’s been confirmed.

"I don’t like going and looking at the numbers because the numbers are changing sometimes almost by the hour…I don’t want to play a numbers game. I think the bottom line is we are seeing cases in Iowa," Quinlisk says. "We know that we have spread of the virus in Iowa and we need to make sure everyone in Iowa understands that we need every person to do their bit in trying to keep this under control."

According to Quinlisk, it will be "relatively soon" — perhaps "a week or so" — before public health officials can determine the severity of this new virus.

"We’re watching it very, very closely to see if it becomes a virus where it is causing more severe illness or whether what we continue to see is this sort of mild to moderate illness with very few hospitalizations and deaths. It that continues, it may turn out that this is similar to seasonal flu or least a bad season of seasonal flu," Quinlisk says. "…I think it’s a little bit premature to say exactly what we’re going to see because we’re still quite early in the stages of this outbreak."

Quinlisk says every public health agency in Iowa has been planning "for years" for a pandemic, and she’s been pleased with the way those plans have been followed.

Quinlisk made her comments today during an appearance on the Iowa Public Radio program, "Talk at 12."

According to a news release issued this morning by the Iowa Department of Public Health, there are seven "probable" cases of H1N1 in Iowa, in addition to the  one confirmed case.