You are here: Home / Recreation / Entertainment / Pella scrambles to get ready for Tulip Festival 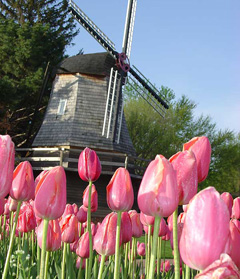 Organizers in Pella are keeping an eye on the forecast as they prepare for their annual tulip festival at the end of this week.

Sadler said they were "running wild" trying to get things done before it rain again.

Sadler believes that could lead to an increase in visitors for what is already a popular event. Sadler says what they are seeing already before the festival begins backs up the idea, as they’ve already seen people from the nearby states of Missouri and Minnesota stopping in to see the tulips.

Sadler says that’s why things have been so hectic in Pella as they try to prepare for the festival. Sadler says they still have some flowers to plant and since it has been so muddy, they have had to hold off on the planting. The 74th annual Pella Tulip Festival begins Thursday and runs through Saturday in Pella.

Visit the Pella Tulip Festival website  for a complete schedule of events.