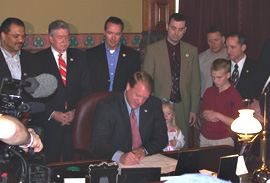 Governor Chet Culver signed a bill into law today that makes it possible for firefighters and police officers to get disability benefits for cancer and infectious diseases from their retirement systems.

The bill also increases employee contributions to pay for the increased costs.

Culver says it’s an important step to protect the men and women on the front lines. He says the bill will ensure that "work related injuries, including cancer, will be given proper consideration for retirement and death benefits."

Culver says he’s concerned that the state’s first responders have "higher than normal" rates of some diseases, including cancer. Culver says the bill is one important way to ensure the state meets the needs of police officers and firefighters who put their lives on the line for Iowans. 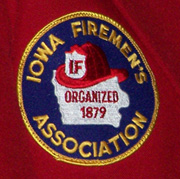 The president of the International Association of Firefighters General union, Harold Schaitberger, was on hand for the ceremony and says it’s a milestone.

He says Iowa is the 29th state to "provide this critical and important protection and benefit to those that are on the front lines every single day." He says it’s an important benefit that is well deserved and that firefighters don’t take lightly.

State Senator Jeff Danielson, a Democrat from Cedar Falls, proposed the bill. Danielson is a firefighter in his job outside the legislature, and says the bill is more important to him as a firefighter than a lawmaker.

"It is who I am, I’m a blue collar guy, boots on the ground, and I think many of the folks that you see in the room here today share those same feelings about why they are firefighters and police officers dedicated to a life of service," Danielson says. Danielson says it took a lot of work to get the bill to this stage.

Danielson says most people don’t realize how difficult it is to actually get a bill to the governor’s desk. He says any bill that makes it through the process is considered a "mini miracle." Another firefighter who is a legislator, State Representative Kerry Burt, a Democrat from Waterloo, was also on hand for the bill signing.

(Note: Jeff Danielson is directly behind the governor in the above photo,  Kerry Burt is at the far left.)